I have been learning lots over lockdown. Not just a refresher of times tables and fronted adverbials for homeschooling but have also enrolled in several online courses. The pandemic has made learning much more accessible and I hope that this is something that continues even as restrictions are lifted. It has been wonderful to be able to continue working with clients over zoom and so far I have learnt that there are several advantages of taking part in baby classes online:

A wonderful technique to boost mood is to find something to be thankful for and I am truly thankful for all of my clients who have joined my zoom sessions particularly if it was not what was planned when they booked.
Being a new parent in these times is strange uncharted territory and you are all amazing. There is support out there and I will always respond to an email if anyone wanted to talk. Local facebook pages are a great way to contact other new parents and regularly advertise the NCT walk and talk groups, which I have had the privilege of leading. Search for Lockdown Babies 2020 Warwickshire group and NCT Warwickshire parents
I hope you can find something to be thankful for in the midst of all the chaos and changes that are happening in the world. This picture of my clients’ baby smiling and  enjoying seeing other babies on zoom certainly made me smile.

My fourth pregnancy was quite difficult as I suffered with obstetric cholestasis (OC), causing itching and disturbed sleep. I was visiting the hospital at least twice a week for monitoring in the last trimester and expected to be offered induction at around 38 weeks. Although a little nervous about induction I felt it was probably a sensible decision based on the research I had done. Most medical guidelines on pregnancy complications can be found on the NICE website (http://www.nice.org.uk) but not OC and so I read the Royal College of Obstetricians and Gynaecologists (www.rcog.org.uk/guidelines) green top guidelines which helped me to understand the risks associated with the condition and what treatment may be effective.

As it turned out I didn’t need an induction as I started labouring one evening a few hours before I reached 37 weeks. It took a little while for me to realise that I was really in labour as I was preoccupied with making a birthday cake for my eldest daughter’s 8th birthday, due the next day. Fortunately, my Mum had the foresight to pack an overnight bag and when we called her at midnight she came over to look after our three girls so my husband and I could go into hospital. One of the risks associated with OC is merconium aspiration (when the baby is distressed, they poo and then breathe it in) and it was recommended that our baby be monitored during labour in the hope that if this happened it would be spotted and acted upon. Labour did not feel very urgent, however, and I saw no advantage to going in too early. I was happy listening to my Natal Hypnotherapy labour companion and relaxing birth music CD’s and felt very calm. Although the contractions were intense, I found positions which made them manageable and my husband found a good massage technique.

At around 2.20am we decided it was time to go in to hospital and as we got ready to leave my waters broke and I knew from experience that I would soon be pushing out our baby. I estimated about 20 minutes until birth and about a 30 minute journey to hospital and also realised that there was no way that I was moving from the position I was in, crouched on my bedroom floor. Fortunately there were some dressing gowns and towels hanging nearby which we hurriedly threw on the floor under me and rang the hospital to let them know we were not going to make it on time. They suggested that we call for an ambulance crew who would assess the situation and call a midwife if necessary (although a planned homebirth is considered as safe as giving birth in hospital, an unplanned one may not be). I did not feel concerned about these events as I had previously had a homebirth and knew that even if my baby was struggling the quickest way out was now to be born on the bedroom floor so I concentrated on what I was doing, relaxing and letting labour run its course.

Within a few minutes an ambulance crew arrived, and despite lots of noise, questions, general chat (about torches!) and multiple offers of pain relief, I was able to continue with what I was doing and push out the baby. The first comment I heard after our little girl was born was ‘Ohh it is not like that on one born every minute!” which made me smile. I think the ambulance crew were used to arriving at the scene of an accident where the injured need conversation to keep them conscious and immediate pain relief – not necessarily what I needed during birth but fortunately I was able to turn my music up loud enough to ignore them. The midwife arrived soon after and sent the ambulance crew downstairs for a cup of tea, much to my relief, and I was able to have some quiet, calm skin to skin cuddles with my baby whilst waiting for my placenta to come out.

Our baby was grunting a little when she was born and had merconium around her face and so we were advised to go into hospital so she could be monitored for 24 hours in case she had breathed some in. It was now about 4am and so we asked a few questions and found out that 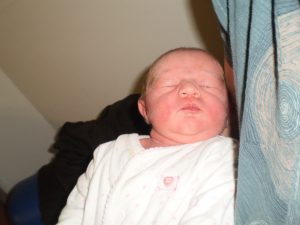 the monitoring consisted of taking her temperature and recording the number of breaths per minute every four hours. We felt confident that we would recognise any signs of illness in our seemingly very healthy baby and decided to wait until morning – about 4 hours after the midwife had done these initial checks)- to go into hospital. This meant we could spend a few hours resting before being able to introduce our new daughter, Sophie, to her three sisters. The oldest, Joanna, being the most excited as she had arrived on her 8th birthday. Sadly, we did spend Joanna’s birthday in hospital but all was well with Sophie, and we left at tea time with lots to celebrate the next day.

Just before I reached 39 weeks, the schools broke up for the summer holidays leaving me with a 3 and 5 year old wanting lots of attention and entertaining. Thankfully, my parents offered to look after them so I could get some rest. As my parents drove away with my older children I felt the first twinges of labour starting. “So much for getting a rest!” I didn’t want to get too excited yet, as I was aware that I could be like this for a few days yet before anything happened, so I went for a walk with my husband to the shops – to buy chocolate, obviously.

By about 8pm, it became obvious that I was definitely in labour. I had prepared a space in one of our upstairs rooms with cushions, a yoga mat and a birth ball and had spent time in there whilst pregnant, visualising labour, practising breathing techniques, getting my husband to give me massages, and listening to Natal Hypnotherapy CD’s. I found myself drawn to the room and the cosy corner I had prepared. We put the music on, kept the lights low, and I used breathing techniques through the contractions. I found that breathing in a very long continuous breath, visualising my uterus being pushed down by my lungs and then exhaling whilst visualising my cervix opening made the contractions very manageable. During my last two labours I had been sick just before I gave birth and I started to feel queasy and so asked my husband, Dan, to call the hospital to check that a homebirth midwife was available for when we needed her. Fortunately she was and agreed to come to us.

Our midwife, Jayne, arrived and came into the room and sat down quietly. She asked me if I wanted her to sit and wait or to start checking me over and I really appreciated not being hurried. Being in labour had altered my perception of time and I found it very difficult to think clearly and almost impossible to answer questions. I was really grateful to Dan for asking the midwife if it was possible for me to hold my baby as soon as she was born and for us to have a natural third stage (no interventions). This was something I had felt very strongly about before the labour but had no way of communicating during the time.

After a while, Jayne asked if she could check my blood pressure and see how dilated I was. I agreed to this as I was curious as to how labour was going. I had been visualising my cervix almost open but suspected that I still had a long way to go. As she examined me, she looked very surprised and decided to call her colleague as the baby would probably be born soon. That news gave me a real boost and during the next contraction I visualised the cervix opening completely, then I was sick, and suddenly had an overwhelming urge to push. I shouted to Dan to get the midwife back in the room as she was now on the phone to the hospital to call for a second midwife. As she came in, I overheard her telling my husband that as she was on her own he might have to help her by passing things if she needed them. 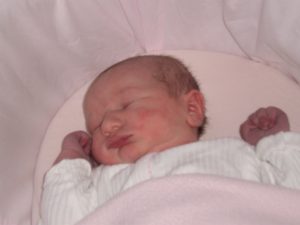 After a few strong pushing contractions my daughter’s head was born, I heard Jayne asking Dan to pass the scissors, which was alarming, but then realised that my waters had not yet broken and she needed to break the amniotic sac, so the baby could breathe once she was born. One more push and she was in my arms, looking up at me with big brown eyes. It was 11.30 at night. It was a real privilege to be able to hold her immediately after birth and we had a long time of skin to skin contact before her cord was cut. Jayne helped us clear up and I had a bath, and then went to bed with baby Esther by my side.